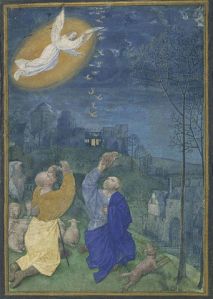 Now we’re to the song that those herald angels actually sung.  Well, ok, they may not have actually “sung” in Luke 2, but they might as well have.  “Angels We Have Heard on High,” while in Latin, contains the correct words of “Glory to God in the highest.”   Though it existed earlier in France (no one seems to be quite sure when it was written), it made its way into English hymnody through the 1862 translation by James Chadwick.  What’s interesting about this is that it is a Roman Catholic origin.  Chadwick was an Irish immigrant to England who became Bishop of Newcastle.  He took a popular French carol, changing it a little (a stanza seems to have been left out, but I’m not sure when or how that occurred), and made it into the song we love today.  The tune, however, is Protestant, making this song a truly ecumenical creation.  Edward S. Barnes was an organist who made his way from fancy Presbyterian and Episcopal churches in New York and Philadelphia to finally settling at 1st Pres. in Santa Monica, CA.  He put “Angels” to the famous tune “Gloria” in 1937, giving us that great chorus. END_OF_DOCUMENT_TOKEN_TO_BE_REPLACED