This sermon took me about three drafts to write. I filled up about ten pages with words, and I thought I was almost done for a minute, before I decided to throw it all away and start yet again. This text kept stopping me in my tracks. There’s a lot that you could say about it, and part of my problem was that I kept trying to say it all. So instead I decided to say just one thing. Shut your mouth.

This is Paul’s argument here in a nutshell. You cannot find justification in the law because the law will not even let you speak. You cannot defend yourself. You are a sinner, and when you call upon justice the first thing that is exposed is yourself. The law shuts your mouth, and you are left with nothing to say. All you can do is ask for mercy. And that’s exactly where God wants you.

“Now we know that whatever the law says, it says to those who are under the law, that every mouth may be stopped, and all the world may become guilty before God” (Rom. 3:19). In this text, the Apostle Paul is essentially telling the Jews and Jewish Christians alike to shut up. They have no ground for boasting in their standing before God, and they cannot appeal to their law-keeping as proof that they are somehow better than Gentiles. This is because the law which they are appealing to actually condemns them. It does not support their case at all but instead shows that God is righteous in judging both Jews and Gentiles to be sinners and under the curse of death. END_OF_DOCUMENT_TOKEN_TO_BE_REPLACED 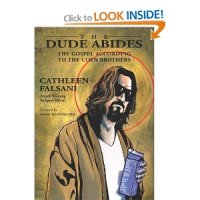 “The Dude” from The Big Lebowski is a lamed-vavnik, or so argues Cathleen Falsani in her very fun book The Dude Abides: The Gospel According to the Coen Brothers.

The concept of the lamed-vavnik comes from a certain school of mystical Judaism. Falsani explains its meaning and significance:

According to various kababalistic teachings, at any given time in history there are thirty-six righteous people (lamed-vavniks take their name from the Hebrew letters lamed— meaning “thirty”–  and vav— “six”) on whom the fate of the world rests. If even one of them were to perish, God would destroy the world. The lamed-vavniks–also known as menschen in Yiddish– don’t know the identity of one another and in fact don’t even know that they themselves are counted among the righteous thirty-six. Sometimes the lamed-vavniks appear to be humble fools– slackers or burnouts, in the parlance of our time– but the rest of us should take heed. We never know when we might meet one of the thirty-six, so we should treat everyone as if the fate of the world rests on their unassuming shoulders.  (110)