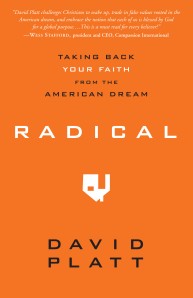 This David Platt video was going around yesterday, and it gave me a chance to hear his basic message. Some friends had asked me about his latest book Radical, which I haven’t read. Also at about this same time Matthew Lee Anderson’s article “Here Come the Radicals” was posted at Christianity Today. I won’t pretend to have an exhaustive knowledge of these various pastors and writers, but I do think I understand their general message and methodology. They argue that Jesus calls us to a total commitment, not just a pick and choose program, and that we must be willing to sacrifice our lives and lifestyles, being open to the new changes that God will make. We must get comfortable with God making us uncomfortable.

There is certainly a lot of good to be said for this, particularly when you compare Platt with other megachurch pastors. He’s certainly a relief when set against Joel Osteen. At the same time, I’m not sure that Platt is really doing anything all that new. I grew up in a revivalistic Baptist church, and each year we had conferences which sounded a lot like Platt. They weren’t as young of course. Our guys were more polyester with big hair. But still, the message was that you could not rely on your culture, your family, or even your going to church to save you. Instead you must have an intense interior experience and relationship with God, and only this “true,” “real,” and “authentic” sort of faith would qualify as trusting Christ. The intensity and sincerity of your faith was the focal point for personal assurance. One of them’s favorite line was, “Do you know that you know that you know?” There was also the catchy, “99% sure is 100% lost.” Platt and co. strike me as a brainier version of the same thing, and the central objection I have to the “radical” emphasis is that they confuse faith with commitment.

You see, faith is not the same thing as commitment. Faith isn’t even the same thing as sincerity. The bible is full of weak and confused believers. Think about doubting Thomas. Or even Peter. Are we really supposed to believe that Peter had a “conversion” after he denied Christ? And if so, then how do you explain his hypocrisy in Galatians 2:11-16? I don’t buy it. I think he was a believer in the very beginnings of the gospels, but he struggled to understand and to even be bold in public.

And then there’s the Apostle Paul:

I find then a law, that evil is present with me, the one who wills to do good. For I delight in the law of God according to the inward man. But I see another law in my members, warring against the law of my mind, and bringing me into captivity to the law of sin which is in my members. O wretched man that I am! Who will deliver me from this body of death? I thank God—through Jesus Christ our Lord! So then, with the mind I myself serve the law of God, but with the flesh the law of sin. (Rom. 7:15-25)

If Paul were taking an internal spiritual inventory, would he find that his faith was truly radical? Or worse, was it truly radical enough?

I can think of one other helpful portrait of faith that does not fit the “radical” mold. It is the woman with an issue of blood who touched Jesus garment:

And suddenly, a woman who had a flow of blood for twelve years came from behind and touched the hem of His garment. For she said to herself, “If only I may touch His garment, I shall be made well.” But Jesus turned around, and when He saw her He said, “Be of good cheer, daughter; your faith has made you well.” And the woman was made well from that hour. (Matt. 9:20-22)

Now if we heard of this story today, we’d probably assume the woman was superstitious and worldly. All she wanted was a quick heal. She didn’t even listen to a sermon! Jesus was on his way somewhere else, to some other healing, and she just ran up and grabbed his garment. But Jesus says that this was faith. Who knows what she understood or believed? Who knows what her motivation was? She just recognized that Jesus had something special about him and reached out to grab it. And Jesus said, “your faith has made you well.”

You see, determining commitment, sincerity, and authenticity– these are all things about you. It keeps your focus on yourself and your own qualities. Faith is supposed to look outward, to somewhere else. In fact, it is supposed to look to someone else, to Jesus.

Faith is hanging on. It’s saying, “Oh God, please don’t let me go.” It is trust.

All of those adverbs– truly, really, fully– they are great and all. You should strive for them. They are marks of maturity and advanced holiness. But they are also sanctification. They come after faith, after God works in you. Faith comes first. Both are good. You want both. But they are not the same thing.

Martin Luther was asked how to respond to doubt, about knowing whether you were really saved or not. He answered by saying this, “I am a son of God. I have been baptized. I believe in Jesus Christ, who was crucified for me. Let me alone, devil!” That’s a really radical faith, radical in the sense of going to the root or foundation of a thing.

2 thoughts on “On Being a Radical Christian”